Hello everyone, my name is Eddie Holmes and I am from the Mississippi Gulf Coast. I am relatively new to the world of the ExoSym, but certainly not new to the world of ankle pain. I have always been very active and into sports – always playing on some team or running a 5k.  My injury happened in 1985 while playing softball.  On a close play at home plate,  I decided to slide in and my cleat got hooked on the plate. I snapped the deltoid ligament loose in my right ankle. This is the very moment in time when my journey started. This happened at a terrible time, at the time I was a 30 year old physical education teacher and high school soccer coach. I was scheduled to drive 50 students to a big 10k race the following weekend. My personal plan was to try and beat my previous time of 38:40 from the year before.  However, I knew while laying on the ground waiting on the ambulance that neither of those things would happen this year.  After an x-ray at the hospital, I was told that I just had a severe sprained ankle. I was familiar with what a sprained ankle felt like and this was not it. So upon my request another x-ray was taken and it was decided that I would see an orthopedic doctor first thing Monday morning.  That Monday morning it was determined I would need immediate surgery to repair the ligament.  This was a long and painful recovery process but after about a year I was moving around ok. Actually, as the years went by I was able to do pretty much whatever I wanted to do. My ankle had limited mobility, but no pain.  Several years went by and I started running again. Once again I was competing in races all around my area and in neighboring states. While training, I would run 20 to 30 miles a week. I absolutely loved to run but I knew cross-training would be good for me too, so before I knew it, I was doing triathlons.

Fast forward several years, I had run 100s of races from 5ks to marathons. I had also completed over 40 triathlons including 6 Ironman events: five 70.3 races and one full distance of 140.6. In 2014, my ankle just got worse and I decided to see a specialist in Houston, Texas. In January of 2015, I had my second ankle surgery. This time the deltoid was tightened and two bone spurs were removed. Although the pain level was better, my range of motion was significantly reduced. Running was out of the question. In fact, walking without a limp was also difficult. If I was on my feet for a long time, the pain returned. During my last trip to the doctor, I had an new MRI and was told that my ankle was bone on bone with arthritis. This was devastating news for an active person. It just so happened that a friend of mine, who has a similar ankle issue, had a brace called the ExoSym (IDEO). He has been doing very well with it and suggested I look into it. So I began the process.

I started going through the questions in my mind:

First, is this brace right for my injury?

Second, will insurance help with the cost?

Third, what will I be able to do after getting the brace?

From the first time I walked into the Hanger Clinic, it was obvious that EVERYBODY there really cares about people. They go out of their way to help and make you feel at home. I’ll never forget being told by Ryan that now I was part of the ExoSym family!  That’s pretty comforting when you are so far away from home (in my case 2600 miles).

My first trip for the fitting was great and I was very excited about getting the real thing. After a long three week wait, I went back to get my ExoSym and to go through my week of PT.  After putting the brace on for the first time, Ryan had me do a few drills in the clinic. We went outside and within a few minutes, he told me to run up the little hill in front of the clinic! To my surprise, I did it again and again and again! All I could think about was sending a message home to my wife and family. Each day I was there was a valuable learning experience. The clear cut message I got while there was that I hadn’t gotten where I was in 5 days. Meaning, it would take longer than 5 days to completely figure out how much I could do using the ExoSym. In the months that followed, I have come to understand that it is probably going to be a continued learning experience. To my surprise I have had almost a complete change of priorities. I have come to realize that although I love running, I also love being able to walk without pain. My ExoSym has helped me do normal day to day activities with little to no pain.

When I came home from the clinic with my brace, after 3 weeks or so, I had some rubbing around my knee. While at the clinic I never had my brace adjusted. As I look back on it, I think I must have been thinking that it was something I would get use to. It was when I saw my leg bleeding I realized that I was wrong. So after talking to Ryan, we decided I needed to ship it back. The first time I put it on after the adjustment was amazing. A small adjustment can make a world of difference in the fit and in turn allow you to do more than you ever thought possible. My device truly fits like a glove.

I can’t say enough about Ryan! I am amazed by his caring attitude and work ethic. I have sent him videos of me running on the treadmill and outside in my yard. He responds every time. Jared was also awesome and so knowledgeable. These are special people who help others everyday. I wonder if they know the depth of what they do, and the hundreds, if not thousands, of lives they have touched. ❤

While at Hanger you will meet people that will probably be life long friends and you will see amazing things happen. I can’t imagine anything but positive things happening to all those who spend time there.

This is the condensed version of my journey or at least my journey so far. I still have lots of things I want to do. My wife Angie and I celebrated our 40th anniversary last summer and our plan was to hike 40 miles on the Appalachian Trail, but because of my ankle injury I couldn’t make the distance, so I want to complete that distance with Angie.  Also on my list is Ironman Chattanooga! It’s down the road but it’s on my list.  I would have to say that the number one thing on my list is to be able to be active with my 3 year old grandson, Bentley for many years to come!

It has been my honor to share my journey with you.

One thing I didn’t mention is that I will be 62 in a few weeks. If I can have success at my age, imagine what you can do! 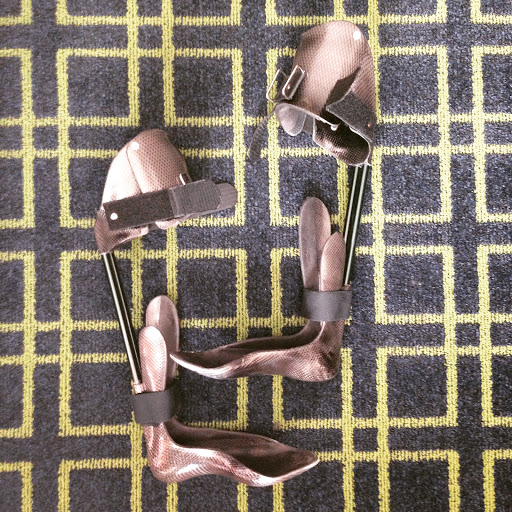