Today, I’d like to you to meet Hanger Clinic ExoSym (IDEO) device patient, Sam, an avid outdoorsman from Washington State. 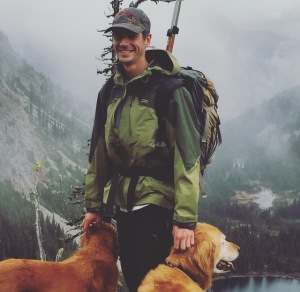 On June 18, 2013, a day like any other, Sam was out cutting timber in Northwest Washington when he was struck by a 99 foot tall hemlock that came crashing down on him. The impact of the tree angulated his left forearm as he lay on the ground in excruciating pain dazed from the blow. Assessing his injuries, Sam noticed he couldn’t put weight down on his ankle so he began to crawl while holding his extremely painful and unstable left arm. Reaching a downed log and realizing he would be unable to crawl over it, Sam used everything he had to get up. Managing to limp on the toes of his left foot, he crawled onto the road to call for help. Sam was flown by helicopter to Harborview Medical where it was later discovered he had broken his left elbow along with his radius, ulna and extensive nerve damage to his ulnar nerve. From all the pain, Sam hadn’t even realized his right arm was broken as well. A chunk of wood had to be removed from his spine and lacerations covered his face and ear requiring multiple stiches. Thankfully, his ankle wasn’t broken, but only time would tell the injury.

Over the next year, Sam’s ankle began hurting more and more. In October 2014, he had a bone spur removed from the subtabular joint, which greatly helped with the pain but it continued to bother him quite a bit. The once active skier, hiker, mountaineer, snow mobiler, and outdoorsman, felt sidelined. Limited by pain to 20 mins of walking, Sam headed back to the doctor determined to find a solution to get him back on the path to a better quality of life. Doctors prescribed anti-inflammatories to help with the arthritis and bone inflammation that had formed in his ankle, but despite the efforts, the pain continued. After several months of unsuccessful alternative therapies, Sam was sent to see Ryan Blanck at the Hanger Clinic in Gig Harbor, WA to try the ExoSym (IDEO) device. It was everyone’s hope that the device could help to provide him some relief. In October 2015, Sam received his ExoSym – a day that changed his direction in life, giving him the ability to return to his active lifestyle without pain. Thanks to the device, you can now find Sam out hiking, climbing, running, surfing, shoveling snow, walking his dogs – he barely sits down! He is back on his snow mobile and says the device even helps him to break up ice on the machine with a swift kick using the ExoSym leg! There’s no stopping this guy! Sam’s goal is to climb Mount Rainer in the next year or so… and I have no doubt he will achieve this! ★ 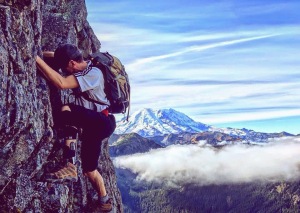 Sam has experienced great success with the device and says one of his greatest moments was running into Ryan Blanck on the ski slopes at Crystal Mountain. Sam is very grateful to Ryan & the entire Hanger Clinic staff for all they’ve done to help him and he is glad he was able to show Ryan that he is out LIVING life to the fullest again. ♥  This past Christmas, Sam received a Fitbit from his mom as a gift to inspire him to keep pressing on.  He had a good first day with that, nearly 30K steps (aka 13.71 miles!). #simplyamazing 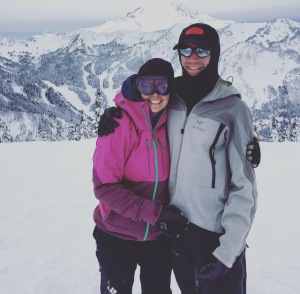 Sam’s advice for other device users is to wear it as much as possible and not to buy shoes too big because they won’t last long. (That’s a good point, if you buy them too big, you’ll start tripping & ripping through them. Not that I’ve done that before or anything…☺) While Sam admits shoe shopping can be bit of a challenge, his favorite brands for the device are New Balance, Merrell & Meindl. Check out his cool hiking boots below! 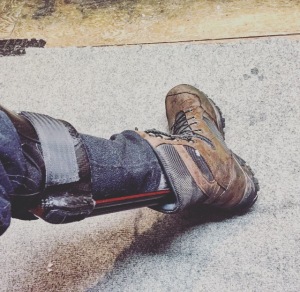 Living by his favorite Bruce Lee quote, “Choose the positive. You have a choice. You are the master of your attitude.” ― Sam is definitely someone who chose to live with an optimistic faith. Through the hard times and disappointments with his injury, Sam made a decision to keep a positive mindset. Even as a tree fell on him, he managed to get back up. Even as the surgeries and treatments failed, he kept his hope. Even when it didn’t look like many options remained, he never stopped trying. A reminder that though certain circumstances may be out of your hands, your attitude is in your control. When you face difficulties, choose to stay positive. Keep the faith. Stay hopeful. And most importantly, no matter what happens, never give up. ♥ 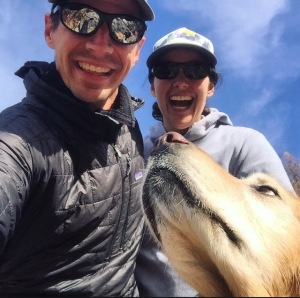 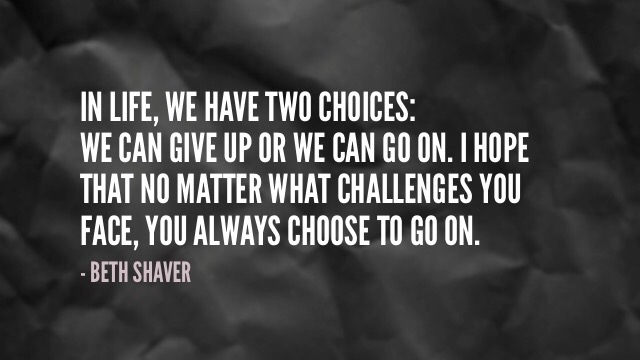